Garcia’s third poetry collection, [Elegies], centers on love, grief, legacy, racism and history. These lyric poems range from an ode to Allen Iverson’s crossover on Michael Jordan, to an original form called a ‘mixtape’ featuring lines from today’s most well-known poets, to a twenty-poem sequence of elegies dedicated to his grandmother, to an essay on police terror, to name a few. The poet explores the complexities of modern life and death through his clear, unflinching, embodied perspective. 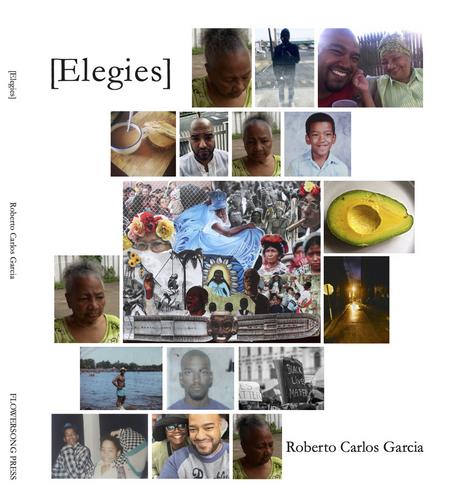 When a poet is born into the world, they are met by a chaos for which they need forms to see.  In Roberto Carlos Garcia's [Elegies], we must qualify that birth: When a Black poet is born into the world, they must quickly rock a coat of resistance, become attached to witness and fearless remembering, understand that poems can be shaped into weapons, bouquets, fire, and testimony.  Roberto Carlos Garcia is that poet that cuts to the heart of the question: What is life?  But, again, for this poet, the question has to be reexamined, restated, or remixed.  In [Elegies], the question, beautifully answered, intrepidly addressed, becomes: What is life for a Black boy-cum-poet-cum-man in a world of unrelenting stares, judgement, and oppression? Fortunately, we have in Roberto Carlos Garcia a poet who has just enough fight to confront history and erasure with a daily naming of names, respect for this literary tradition and lineage, and an obligation to battle dominant tropes. He is in that class of necessary poets, our neighborhood's panacea against forgetting, and a primer on writing a book with just enough love to save us all.

Roberto Garcia's singular voice is at its most potent in this remarkable book, which is grounded and glorified by a centerpiece of lyrically evocative elegies, both rough-hewn and tender, which lay bare the poet's longing and his unremitting quest to fill the gaping hollow left behind by the death of his revered grandmother.  Although he writes "& the moon offers only the cold silver of struggle," there is also incessant muscle here—the birthing of the "mixtape," an addictive new poetic form; "A Tempest" a gorgeously inspired otherworld inhabited by Garcia's mother and father, and the book's solo prose offering, a bitter and blade-edged essay that seeks, yet again, to ascertain the utter urgency of the black life. 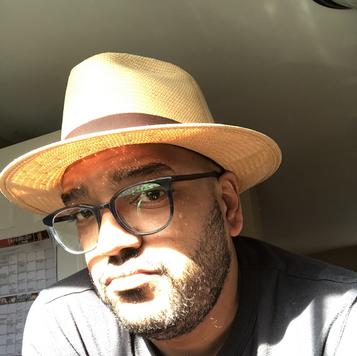 Poet, storyteller, and essayist Roberto Carlos Garcia is a self-described “sancocho […] of provisions from the Harlem Renaissance, the Spanish Poets of 1929, the Black Arts Movement, the Nuyorican School, and the Modernists.” Garcia is rigorously interrogative of himself and the world around him, conveying “nakedness of emotion, intent, and experience,” and he writes extensively about the Afro-Latinx and Afro-diasporic experience. Roberto's third collection, [Elegies], is published by Flower Song Press and his second poetry collection, black / Maybe: An Afro Lyric, is available from Willow Books.  Roberto’s first collection, Melancolía, is available from Červená Barva Press.

His poems and prose have appeared or are forthcoming in POETRY Magazine, The BreakBeat Poets Vol 4: LatiNEXT, Bettering American Poetry Vol. 3, The Root, Those People, Rigorous, Academy of American Poets Poem-A-Day, Gawker, Barrelhouse, The Acentos Review, Lunch Ticket, and many others.

He is founder of the cooperative press Get Fresh Books Publishing, A NonProfit Corp.

A native New Yorker, Roberto holds an MFA in Poetry and Poetry in Translation from Drew University, and has been nominated for a Pushcart Prize.

The power and necessity of the poet resides in his/her or their willingness to mature with language alongside time’s continuum—for the sake of the historical and humanity. What I mean is that Roberto Carlos Garcia’s third collection, Elegies, is poetically structured through the lament of love, an elegiac love that he has come to recognize through temporal space, and how this examination manifests itself in the love of culture, the love of melanated skin, the love of family and the love of self. When Garcia makes the lyrical avowal: “I don’t want to be afraid of love/I want to know where to love from,” it is unmistakable that this poet has been searching for that calibrated center from which to create a dirge of observation, not only in the beautiful but also the undeniable ugly that terrorizes within the construction of race. Elegies is an exercise in the precision of craft, and I heart these poems for the aftersensation they create in the body: hope, empathy and love.